Eden of the East [Anime Review]

I want to sum up this review by just saying this anime was awful, but it had some good parts too, so that wouldn’t be fair. The fact that I’m this late to watching it is impressive by itself. It took me eight years to finally watch this show, and not many anime last on my list for that long. That being said, I think the wait raised my hopes for it a little too high. From what I’d heard of it, Eden of the East was one of those anime I thought I could put away for a rainy day as a reliably good show. I’ll say not only that I’m glad I didn’t wait for that rainy day to come before watching it, but that even after the two films to end the story, I still feel like the thing didn’t end well. The whole anime gave me the feeling that the writers didn’t know where the plot was going when they started. 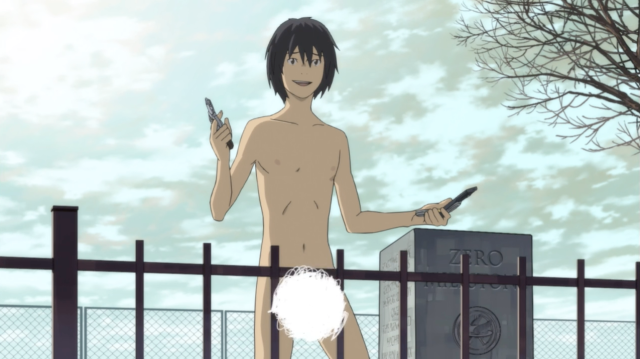 Eden of the East starts with a naked dude with a phone and a gun (the gun doesn’t matter) appearing outside the white house with amnesia. Right off the bat, amnesia. The heroine starts off as the main character but her part in the story becomes more and more insignificant to the point that you wonder why her scenes are relevant for key events. The key events I’m talking about is the game where a few individuals are given phones with ten billion yen and a voice aid that will do anything you ask for so long as you’re within some vague parameters. With all this, they are supposed to “improve” the country. They then introduce the heroine’s group of tech-savvy friends that try to help the main character who is locked into this game.

You can see just from that short description that the plot is all over the place and this allowed for one of the few good parts of the show: the convoluted plot allowed the first half of the series to have an air of mystery. However, nothing ruins a good mystery like bad explanations to those mysteries, and that’s where Eden of the East falls in quality. I knew from the moment they explained the point of the game that it would have a cop-out ending. Eden of the East did not surprise me in this even after two movies that could really have been one if the director either knew anything about pacing or how to make satisfying conclusion.

Another aspect of the anime I still can’t decide on is the main character. Takizawa is the most flaky main character I have ever watched in an anime, and I don’t know if that’s a bad thing, because when added to his charisma that draws people to him, it makes him seem like an absolute asshole every time he ditches them. But on the another side of the coin, once you catch on to this characteristic and the naive way the supporting characters react to it, it ends up being hilarious without it meaning to be.  Although I’m sure the ending was supposed to be dramatic and emotional, I could help but laugh from it.

For Production I.G., the character designs and animation is sub-par, the 2D characters really clashing against common 3D and water colored backgrounds they used. The character designs put me off, with nose shadows and wide faces making some of their emotional reactions seem unconvincing, which, along with the main character’s devil-may-care attitude, stops you from feeling any real suspense or engagement. On top of that, with the amount of censored male wang on display in this series (and wang centered themes), I was almost convinced by my theory that this anime was just an overly convoluted, badly executed comedy. 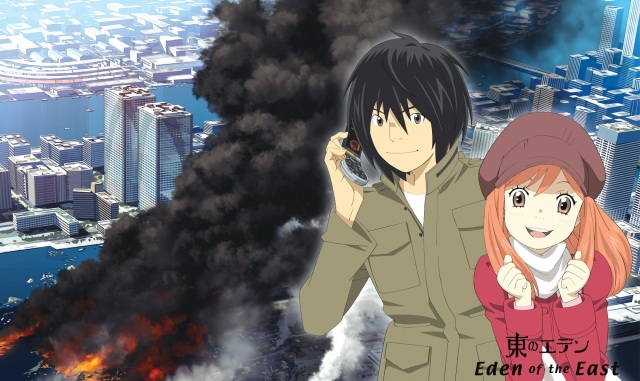 My last criticism was with the ending films, which took the few subtleties of the series and hammered them home very ham-handily. We get it, baby boomers were dicks and their children are lazy, were two movies and a convoluted economic power game the best way to show this? I haven’t seen a more forced ideologically driven theme since reading Ayn Rand. There were some scenes that took me out of the show so much that I couldn’t possibly figure why some people consider their favorite anime of 2009. However, that’s not saying much. You can put down one of my opinions as being consistent for the last 8 years, and that was that 2009 was the worst year yet in regards to anime releases. 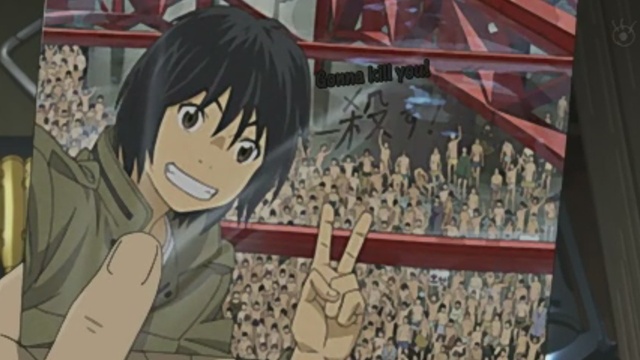 7 Responses to Eden of the East [Anime Review]