I’ve watched the Ghost in the Shell film twice now, and although it’s really only just a ‘good’ film by most measures (it’s still far better than any other western, life action anime adaptation so far), anyone who said anything about white washing being bad for this film should immediately swallow their own words upon watching it. Although, it should be rather obvious that anyone who uses such dismissive language wouldn’t give this film the time of day in the first place, ironically making their complaints vacuous from the start.

Makoto Kusanagi is Japanese and this is shown in flash backs in the third act of the film. The question of why she is put into a Caucasian body, Scarlet Johanson, actually makes more sense in the context of the film than if she had been given an Asian body. The first point to eliminate is that she looks Japanese in the anime. She doesn’t, nor does it mention whether her body is supposed to look Japanese or have any connection with her ethnicity. Either way, her being Caucasian in the film makes way more sense in the film than it does in the anime. Why? Because the villain is trying to make sure she doesn’t discover her past! What better way to do this than changing her very identity so she’s less likely to discover who her parents were and what happened to her as a child? Using a white actress made sense in the context of the film, so why are people still complaining? 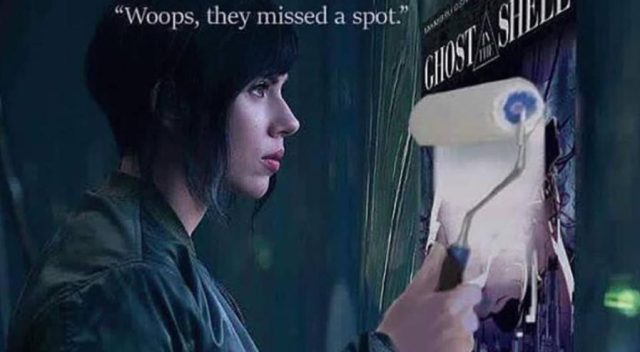 That’s the real question for this post, my frustration over infantile, oversensitive, ideologues and their crusade to bitch about things that are actually decent. What is all this jumping-the-gun, white washing finger pointing, reactionary bullshit really all about? I mean even Japanese people, including the creators of the original anime, thought that the casting was fine. So why it is that westerners in particular complain and sulk about this kind of thing so much?

Two reasons: Racism and because people are over eager to use their new buzzwords to show how virtuous they are before they’ve even watched the film. Those people should quite deservedly only be able to watch the films that fall exactly in line with every view they have, thus leaving normal people alone to enjoy actually good films. With no respect whatsoever, anyone who enjoys good story telling in films should tell these people to promptly fuck off. They are not helpful, they produce nothing of value themselves and quite frankly the world could do with less idiots. For those of you who did end up enjoying the film after all that bitching, don’t you feel like morons? 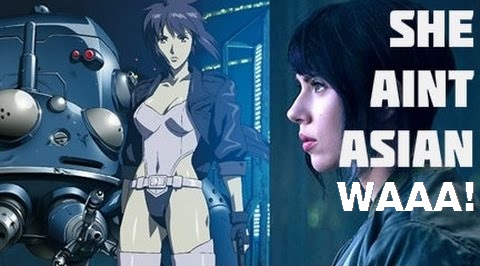