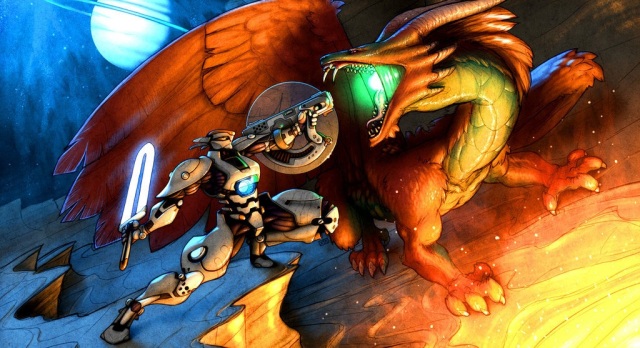 Science fantasy can be a difficult genre to pin down. I like to think of it either as a fantasy world created through sci-fi elements (e.g. post apocalypse, cyberpunk, space opera) or vise versa. Considering these bridging genres can be fun plot tools to work with, I’ve decided to give examples of how using them to write science fantasy plot lines might work. This first example mostly uses the post apocalypse genre as the means of bridging sci-fi to fantasy.

Interstellar space travel via hyper-gates allows for humans to exist on two planets at once. The hyper-gate on one end is destroyed, killing the majority of people on that planet. In reaction, the people on the other planet are too scared to make another hyper-gate, leaving the planet of the destroyed hyper-gate for dead. The technology of this planet continues to advance until much of it is done through genetic advancements, becoming mostly indistinguishable from magic.

On the other planet, which is mostly destroyed by falling debris from the exploded hyper-gate, a few humans survived, and go out in search of others. A new society is created out of what meager technology can be found. They form their own culture and history, the destruction of the hyper-gate becoming a part of their legends. Millennia pass and science and tech has regressed to the point that resources are scarce and the societies have turned into feuding states.

People from the advanced planet have finally gotten over their fear of interstellar space travel and send a group of people back to the destroyed world to see if they can reconnect with it. They are cut off from their homes but meet with the human inhabitants. One of them makes himself out to be a god of the hyper-gate legend and has all but one of the others in the group killed by his new followers. The one who escapes breeds with a woman, dying before he can tell his son about the genetic abilities he has. The son believes them to be the same magic as the new god ruler of their world has, and that he is the only one who can destroy him.

And there we have it, an example of a story created by bridging the science fiction and fantasy genres.